This award is for an individual who has achieved success at county level or above through competing, coaching or volunteering in sport or made a significant difference to individuals or groups through their contribution to sport in County Durham.  This person will be seen as a role model within their sport or community. 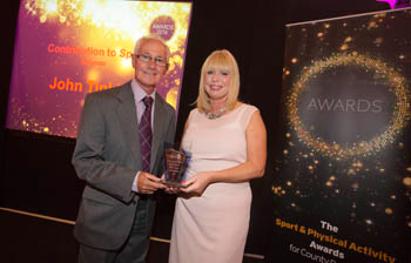 The winner is… John Tinkler

John became involved in competitive athletics over 50 years ago, in 1962, when as a young teenager displaying athletics talent he became a member of Elswick Harriers. He remained a member, competing to a regional standard, until late 1977, when he, along with his father, left to establish a new club in their home town of Chester-le-Street.

Whilst John’s father Bobby served in the role of Club President for many years, the true driving force behind the establishment of Chester-le-Street & District AC was John. He has served as Club Chairman for over 30 years as well as a Senior Coach. He has been ever-present at club training evenings for 38 years, and has coached and mentored generations of young distance runners, a number of who have seen success, as junior athletes, on the national stage.

Simple maths would suggest that John has accumulated around 11,000 voluntary hours as a club official and coach, but this only takes account of his coaching on club nights. The truth is that this is many more; from committee meetings, to supervising long weekend training runs, to weekends accompanying club teams to competitions up and down the country.

As a leader, coach, friend and confidante, John is a true inspiration.